The aim of this post is to put forward proposals to improve equality in academic appointments and promotions. The primary intention is to improve prospects for women academics, although these proposals would also benefit both women and men who have taken career breaks, work part time or who have worked in industry or other sectors. I propose two ideas that are detailed below: first, a move away from ‘career total’ publication metrics in favour of ‘personal best’ metrics; second, a commitment to gender balanced panels.

I am putting these proposals for discussion within the school/university in which I work. However, the problems (and solutions) are really quite general – certainly in the UK and probably internationally. Thus I am putting these ideas into the public domain because I would like to see them discussed and implemented across all institutions. I have also taken a ‘life science’ focus because that is the domain in which I work; I am sure that there are similar challenges in other fields.

The graph shows a ‘typical approximate proportion’ of women and men at undergraduate, postgraduate, postdoctoral, assistant professor (lecturer), associate professor (senior lecturer / reader) and professorial level in a ‘typical’ Life Sciences department: these data are based on some real data but have been modified to give a straighter line and to preserve anonymity of the data sources. 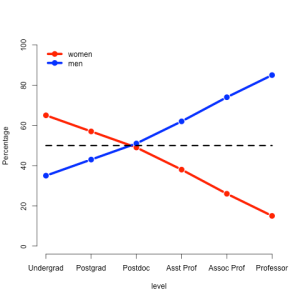 While the majority of students are female, the majority of staff are male, and the proportion of women decreases at every stage of career development. There are many complex reasons for this; nonetheless, this situation is a disgrace, not to mention a tremendous waste of talent. It is incumbent upon us to take action to remedy this. There are likely to be very many actions that could help. Here are two I propose: they are certainly not exhaustive.

My first proposed change is to stop using ‘career total’ publication metrics for appointments, promotions and academic biographies and move instead to ‘personal best’ metrics. Career total publication metrics include total number of papers authored, total citations, h-index and other such measures. For example, a university might have guidelines for the number of publications needed for a professorial appointment. These metrics discriminate against people who have had career breaks (especially women), worked in other (relevant) sectors (industry or public bodies) or who work part time (e.g. 80%; also often women).

The ‘personal best’ metrics I propose have solid precedent and foundation, namely in their use for REF. Here is an example of how such a system might work for appointment or promotion:

These criteria would completely replace career total judgments. Other criteria (on teaching, contributions to the university, international reputation etc.) would of course remain in place. This would be a fairer, more transparent system because universities would be recruiting and promoting people on the basis of their best research. And this system would also be aligned with REF, which would itself have benefits. Moreover, I would suggest that we use these criteria when describing biographies of senior academics. We would not say “Professor X has published over 150 papers…” Instead, we would say “Professor X’s most important work has been Y, and most important recent work has been Z”. Thus we could also eliminate ‘career total’ as a mark of esteem and instead use a ‘personal best’ esteem narrative.

The second change is to ensure that all panels for recruitment, fellowship and promotion decisions are mandated to be at least one third women (and, for that matter, at least one third men). This proposal is similar to Owen Barder’s Pledge. I have sat on all male panels, and was appointed to my current job by an all male panel. I am not suggesting that all male panels are necessarily intentionally biased, but it is very easy for unintended bias to become part of such a process. This proposal would apply to recruitment panels (for all staff – including post-docs as well as permanent academic staff), fellowship decision panels and promotion panels. A one third composition could be implemented as follows:

These compositions would help to reduce unintended bias and, in my view, improve prospects for career progression for excellent women scientists.

3 thoughts on “Gender Equality in Appointments and Promotions: Two Proposals”